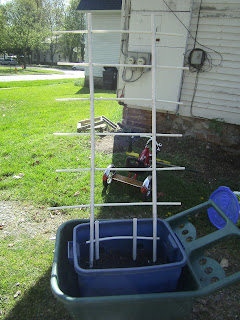 So today my neighbor and I worked some more on our awesome backyard and I decided to plant the beans. I went to put some potting soil in the big bin I had picked out to use (big enough to use the trellis in it for the beans to grow up) but when I went to fill it I realized I was out of potting soil. So I was going to take some dirt out of the garden but I thought, hey why not check the compost bin to see if anymore has broken down enough to be soil. I recently had emptied all the finished compost out of the bin to fertilize my garden so i wasn't expecting enough compost to be finished to fill the bin. Yet that is what I found. I had more than enough to fill the bean bin and so I planted to bean seeds in dark rich compost fresh from the bin. YAY! 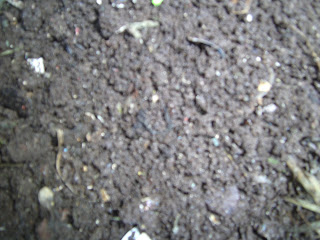 Now onto upcycled cowgirls. My son asked me a few days ago to make him a Jessie the Cowgirl Doll. He got the really nice Woody and Buzz dolls for his birthday and Christmas so rather than spend 40$ for no reason I decided to just make him one. I was going to make a cloth bodied doll since she was one but I decided to use an old craft doll I had. She was a fashion craft doll like a big barbie. So I removed all her hair hand seeded yarn into her scalp. I hand sewed a felt cowgirl hat and outfit and tied her hair in a braid. Her outfit isn't exactly like the one she wears in the movie, but it's cute and Bug flipped when he saw her finished this morning. 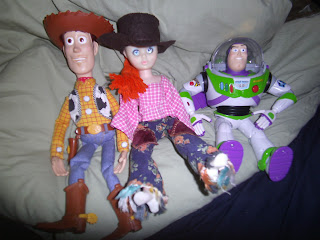