So I have been so busy and worried about getting the Holidays together and making sure this baby is ok that I forgot completely but as of November 9th, this blog turned 4. 4 years!!! It's been a wild ride. I really want to thank all of my loyal fans and readers. I am also so proud to say that we are almost at 40,000 hits. The current count is 39,968. I also want to thank you all for hanging in with me this year. I realize that losing my baby and the long drawn out miscarriage that followed caused the amount I update this blog to be about half my usual stats. I also have spent the year writing more about loss and rainbow babies than green living but I really appreciate all of you who have stayed with me. Thank you so much for your support and love.  I hope that this coming year will be full of all new adventures as I tackle a happy new spin on Green Mommy Life... 2 kids!!!

Posted by Green Mommy at 9:41 PM No comments:

Well as of yesterday I was 14 weeks 1 day, which was the day exactly that Asya Rose was born sleeping. We lost her around 12 weeks, found out at 13 weeks 4 days and she was born in an at home water birth, all natural at 14 weeks 1 day. I held her in my hands for about 30 mins and then buried her. Hubby and Bug never knew until it was all over. They knew we had lost her of course but they didn't know I had gone into labor or that my water had broken or that I had given birth. It was the closest thing I will ever get to a natural birth, as this baby will be born via c section. We don't have a choice this time due to the risks and the rules on VBAC up here. I had it in me to fight last time but this time after losing Asya I just want my rainbow home safe and sound. So unless I go early on my own it will be a c section. But aside from all this back to my original point.. here I am at 14 weeks 2 days. 14 weeks 2 days!!! 24 hrs further along than the day I was when my daughter was born. I am now officially further along and what is more this baby is happy, healthy, and growing well. In a few weeks we should know the sex and hopefully finally choose a name. We have been having a really tough time with that.
So as we are getting closer to the due date, I set about seeing what we can reuse or upcycle from Bug. as it turns out we really won't be needing much. We have clothes, diapers, blankets, bottles... a bouncer and we recently bought a new swing that was used from a friend ( so more reusing). Our baby carriers are still in great condition and our convertible carseat is still under it's expiration date (though the baby car seat will expire soon after the baby is born.) We may get a few months out of it though. All in all we are looking at going into this baby needing very little new stuff. This baby is going to not only be a Rainbow Baby but a very Green one too. Just like her/his Big Brother. For Christmas I am making Bug a Big Brother t shirt. I can't wait to give it to him. Well I don't really have any awesome food pics or anything (although I have been cooking up a storm) so instead I will leave you all with a gorgeous snowy picture of what our town currently looks like. Happy Holidays Friends! 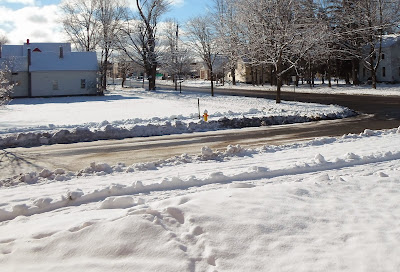 Posted by Green Mommy at 9:26 PM No comments:

A Wild Year: From Green to Black to Rainbow

I apologize to anyone who has not liked that this year the focus of this blog has swung from mostly about Green Living, to one family's struggle with loss and recovery and finally now.. a journey (hopefully) to a new baby. I began this year on January 1st, about 7 weeks pregnant, and had just lost my Grandmother the night before. Here I am looking down the barrel at Thanksgiving, Christmas and yes New Years again, this time I am currently almost 13 weeks pregnant and hoping to start 2014 with the 2nd half of a pregnancy that will end with my beautiful rainbow baby coming home to us. Last night I found the heartbeat on my home doppler for a good 10 seconds. It is beyond calming to be able to listen at home every few days. I try not to use it too often but I really do need the reassurance. If I had to go 4 weeks, or even 2 weeks without knowing how the baby was doing I would lose my mind.
Yet alas life does go on apart from growing a new life inside of me, I have begun the annual Handmade Christmas Gift  insanity. Between crocheting, knitting, sculpting and sewing, candle making and other crafting... I am slowly assembling the gifts for all our friends and family. I will be showing you all the pictures like every year. For right now though I would like to share 2 ornaments I made for our tree this year. They are to symbolize and honor the two very important people we lost since last Christmas. One is for my Grandmother, the other Asya Rose. 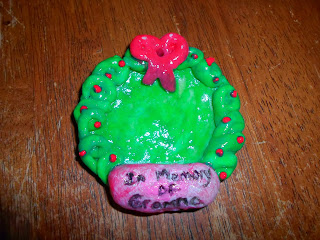 This one is in honor of my Grandmother. I am going to print out a picture of her and put it in it and then do another layer of the gloss spray. I think when it is all done it will look really nice. 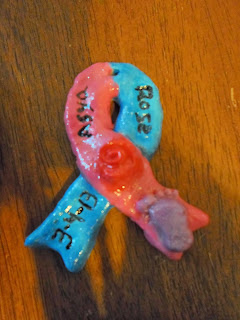 This one is for Asya Rose. I sculpted a remembrance ribbon and then sculpted a tiny baby foot print and a red rose. The ribbon has her birth/death date on it as well. I am really kind of proud of how it turned out. So now our tree will always honor these two special people that we loved very much.
Posted by Green Mommy at 4:08 PM No comments:

Making Your Own Pumpkin Puree 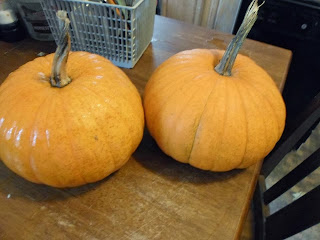 Now that Halloween is over, what should you do with all those pumpkins? Well if they were carved into Jackolanterns, well then they are good compost material and not much else, but hey compost is very important. If however you left them alone, as we did all our home grown pumpkins (we only carved the ones we bought from the store), then you can make your own pumpkin puree. I started mine this weekend with two of my pumpkins, but I have many more to do before the snow falls. 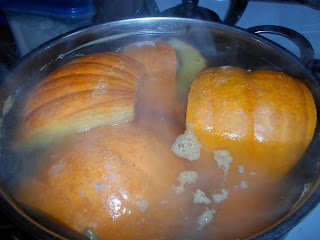 Basically you can do pumpkin puree in one of two ways, chop up the pumpkin, scoop out the seeds and gunk, and then either boil it until soft in a large pot, or bake it on a tray with a little water in the bottom of the tray. I personally prefer the boiling. I do not know the actual nutrition info for either method, or if one is preferred, but boiling offers a much more uniform puree and is much easier to work with I feel. 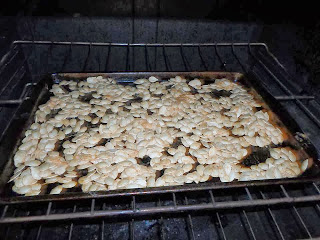 Now the seeds if you saved them are great for roasting, while your pumpkin is boiling. Once the pumpkin is soft, simply let it cool enough to touch and scoop the soft insides into a bowl, and of course compost the shell. 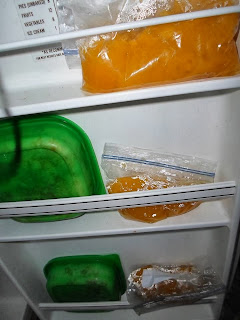 Once it is scooped into a bowl, simply scoop portions into freezer bags and freeze, or if you prefer, into canning jars and can. From two small homegrown organic pumpkins I got an entire tray of roasted seeds and about 1 gallon of puree. Now you can use that puree for anything you need pumpkin in. A homemade Pumpkin pie using homemade puree, is delish!
Posted by Green Mommy at 9:25 AM No comments: