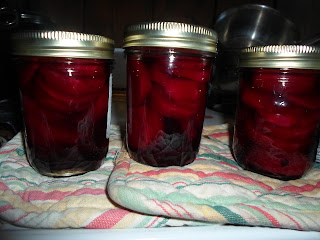 So somewhere amidst the constant stream of family get together's, play dates, birthday parties, and beach days, I found myself again. I have had my gardens do exceptionally well this year so far and so I have already canned pickled beets, pickled radish snaps, and pickled squash.
As I sat at my kitchen table this morning, plucking radish snaps off the vine to pickle, sweet pickle brine simmering on the stove,  Bug playing quietly on the floor with his toy dinosaurs, NPR on the radio, and a cold breeze blowing in the window while the rain poured down softly, I felt right. It all clicked that here I am just 5 weeks away from what would have been my due date, and I somehow am happy again. 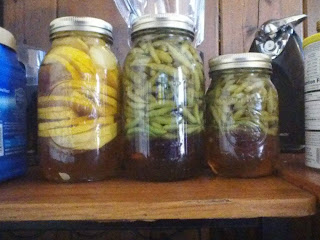 Life has cycled around and a big part of that has been my garden. There is something so exquisitely healing about creating life. You plant a seed, give it some love, some water, some sun and it gives you joy, air, and food. You live in a symbiotic relationship. Being able to create life somewhere in lieu of giving my daughter a life has given me peace.

Posted by Green Mommy at 3:11 PM No comments:

More than a Princess: Little girls break down gender stereotypes everywhere but why not boys?

So I am sure if you read this blog that you know who Bug is. I started this blog when he was 9 weeks old and he is now about 10 weeks from his 4th birthday, which makes this blog 19 weeks from 4 yrs old. So needless to say that is a long time to talk about my kid, which I do a lot. One of the things I talk about on here often is gender stereotyping and how I disagree so very much with it. I don't know if I have ever explained entirely why. My reason is well one it is wrong. I think forcing girls to wear pink or be "girly" is wrong but also so is expecting your son "to be a little man" or wear cammo or like trucks. From day one we let Bug be.. well Bug. He has always been allowed to do what he wants as long as it isn't bothering or hurting another living creature. 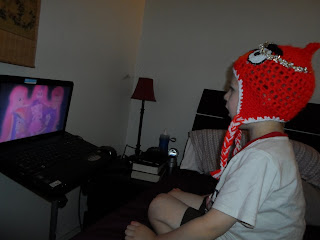 I would like to share a little bit about him with some pictures. Tonight I took some unposed totally random picks of Bug as well as his room. Here is what I captured. The first picture here is Bug... in his element. He is wearing a dino t shirt, shorts, the Angry Bird hat I made him, and my tiara from my wedding to his father. He asked to borrow it so that he could have magic like Twilight Sparkle. He is watching his current favorite movie the new My Little Pony movie "Equestria Girls". He loves My Little Pony. 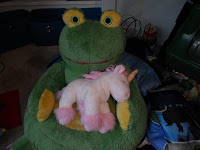 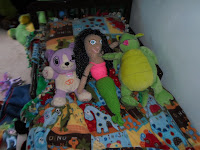 This is his frog chair with his favorite pink plushie unicorn. 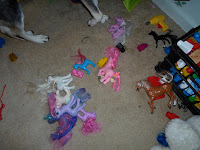 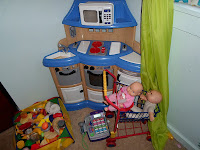 Here is Bug's bed complete with dino blanket and pillow that I made him as well as his Violet "My Pal", which he asked for instead of Scout, his mermaid he asked me to make (she is from Jake and the Neverland Pirates), and his dragon.
Here is his kitchen set, which he has endless food and dishes and tea sets for. Last but not least his floor is always scattered with My Little Ponies.
So you may be wondering what brought on such honesty. To be truthful it was a few things but one in particular. Lately I have seen more and more efforts by mainstream media to "break free of Princess". To let little girls get as dirty and messy and be as smart and courageous as they can be. Which don't get me wrong I very much agree with this... VERY VERY MUCH! But I simply think it should be a two way street. I saw an ad today for a toy company called "Goldieblox". The launched a video ad that shows girls cheering and proclaiming freedom from the "pink aisle". They specialize in engineering toys for girls. I think this is awesome. I do however remember a time not that long ago before there was a "pink aisle" and a "cammo and guns aisle". I remember as a kid the most girly things there was was Barbie and the "toy aisle" had both Barbie and trains, dinos and science kits and even art kits which back then had BOTH boys and girls on the boxes. The last few times I dared to venture into the toy aisles of a store and not just shop on Amazon or make Bug's toys for him, I was appalled at the lack of any art, jewelry, craft, or even science kits that had boys on the box. THEY WERE ALL GIRLS. We have gone so far to try and make sure girls can be all they can be that we are forgetting about boys. It is perfectly fine for a girl to be sporty, muddy, not wear makeup and live in sweats, but if a boy wears pink, nail polish, and loves baby dolls, and My Little Pony, then he is often told to stop, and told to "be a boy, stopping acting like a girl, stop being "gay"".
Which brings me to another point, I know or have met loads of guys who are straight as can be but love pink, wearing makeup, wearing nailpolish, ect. You know what makes someone gay? Having sex with someone of the same gender. Which by the way is awesome, and I fully support, but honestly I have known some seriously butch and manly gay guys, and some seriously straight men who enjoy dressing in pink or even dresses. What someone enjoys, or what makes them who they are does not always mean they are gay. The same of course goes for women. We as a culture are far too wrapped up in gender stereotypes and it bothers me to no end. If my son does turn out to be gay, so what.. I will dance for joy at his wedding and love his husband as a second son. If he is straight but loves ponies, and pink and unicorns, so what he will be a awesome and well rounded kid who probably will be a heck of a lot nicer then some kid who spends his childhood being told to "be a man" and that boys like my son are wrong. I say LET YOUR KID BE YOUR KID. Be whatever they want to be. Just love them for who they are and not what you want them to be.

Posted by Green Mommy at 9:10 PM No comments: