No I won't bore you with all the details of my day yesterday, and no this is not a brag post about how I finally achieved my degree in Biology, which hopefully will allow me a job in a field where I can further my desire to make this world a more green and sustainable place for our children. Mostly I want to talk about a more universal topic in this post, that of family, motherhood and what you can achieve for your children.

I began college in 2001. I went for three years and due to one bad semester where I had stopped going to classes due to family issues I lost my financial aide. They gave me a few semesters to overcome it but no amount of 3.7's and 4.0's can wipe out 0.0's. So I was given a choice, I could appeal and try and fight for my financial aide or I could take a leave from the school. I took the leave. I worked, I got married, I became a mother, I began this blog. When my son was born I knew I wanted to go back to school. I knew I wanted to prove to him that no matter how long it took, no matter how many classes I had to retake, or how hard it was to do it while raising a child, I would do it, if only to prove to him someday that he can achieve anything.

So in the spring of 2010 (January) I got back into school for that semester and started working towards finishing my degree in Biology. I had a 4 month old baby, still EBF, and was taking on a loaded schedule. On the days both me and hubby were gone, we had hubby's mother watch him. After a few semesters though we felt it would be better to put him in daycare so that was another huge hurdle we faced. The first year I was back in school we did not own a car, so I biked in snowstorms to get to classes, pumping milk between lectures, and in some cases getting so engorged that I would wince in pain over my chem lab experiments. Bug began spending more time on campus then he did at home. He became a campus baby, often attending classes with me, and even making friends all over. The 5 semesters I took to finish my degree saw both his 1st and 2nd birthdays, I had days where I could not attend classes because my son was sick, or our child care was not available. I did things I am not even proud of as a mother such as begging friends last minute to watch him for the day so I could get to classes. I am even ashamed to say I often would turn on hours of TV shows for him to watch while I tried to write a paper or study for a test.
Getting my degree with a 4 month -32 month old child was a battle. Everyday we, as a family, had to wake up and say, how is this day going to work. We faced challenges together but the unwavering support and love of my husband and Bug never went unnoticed by me. They always were there when the chips fell. They would pick up the pieces. There were days when the finals and the crying baby got to be too much and I would just flop down declaring I gave up. Hubby would whisk Bug away for a trip to the store or to play with Daddy so I could study for exams.

Yesterday when I earned my diploma and walked across that stage I was so proud of myself , but nothing and I mean nothing meant as much to me as hearing that little voice say "Congwatulations Mommy I am sooo proud of you". Even Hubby was choked up most of the day expressing how proud he was of me. Seeing their faces beam with pride was all what made it worth it. I have had so many people help me along the way and offer love and support and I appreciate every one of them but the two people who count the most, the ones who helped me everyday and who I know I could not have done it without is that of my loving hubby and wonderful amazing little boy.
I would also like to add a special note that my cousin Sara who is an amazing woman and who does for women with PCOS what I do for Green Mommies, and herself is a pretty green mom, also graduated this weekend with her Masters in Teaching. She became pregnant shortly after she returned to school and did work while she had swollen ankles and morning sickness. She gave birth and had a bouncing baby boy to raise all while going to school, she only took off one semester during that time. So My heartfelt congratulations goes out to her as well. She is awesome!
Motherhood is a two edged sword you love someone so much that you would die for them, but you live your lives to make them proud, and you strive to be the person you want them to be someday. It is a hard line to walk and we all fall short sometimes, but we are the strongest most fearsome creatures on this planet. WE ARE MOMS! 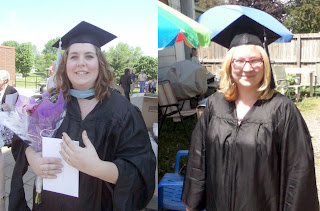