So last year I began to scratch the surface on backyard edibles. I began of course with what one could find in my own back yard or back yards like mine found in the Northeast USA or Canada. I discussed burdock, wood sorrel, black raspberries aka black caps, pineapple weed aka wild chamomile, and dandelions. This year I want to get to even more from the Northeast and possibly discuss ones from other parts of the country. 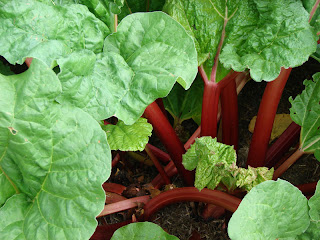 So let's start this year's backyard edibles off with one that is right now in season or will be shortly, is delicious on it's own or baked in a pie... that all around yummy thing: rhubarb!
So what is rhubarb? Well if you live in the northeast it is a plant that grows all over your backyard that as a kid you ate as fast as you could, probably with a little salt or sugar sprinkled on the celery like stalks. Rhubarb is technically a vegetable, like all edible stalks such as celery or asparagus. It tastes much like a fruit though and is often used in combination with fruit and berries in jams, pies, sauces, syrups, drinks etc. It's uses are as varied as the uses for fruit. The leaves are poisonous. When eaten one should be careful to remove all leaves and eat only the stalks.
Rhubarb also has medicinal uses. It can be used as a strong laxative. Its roots have been used as a laxative for at least 5,000 years. The roots and stems are rich in anthraquinones, such as emodin and rhein. These substances are cathartic and laxative, which explains the sporadic use of rhubarb as a dieting aid. The roots contain stilbenoid compounds which seem to lower blood glucose levels in diabetic mice. (wikipedia.com) You may be surprised to know though rhubarb can be found in many places with climates similar to the northeastern USA. It is found in the North West in Oregon and Washington, the UK, Russia, etc.. The only places it is not usually found is in the south or anywhere without cold winters.
It is a perennial so even if you do plant some in your yard you will get it back every year and long after you are gone.. that plant will still be giving food to the people who now live there.
Rhubarb is such a beloved food that it is now a highly sought after plant and even some varieties have been domesticated but domesticated it may be this remains a Backyard Edible. It grows wild almost anywhere. Unfortunately one place it does not grow wild is my backyard so I have to find it elsewhere. I am hoping my next house has a big huge rhubarb plant in it. So if you have never tried rhubarb I highly recommend it. It is one of the tastiest things you will ever try.