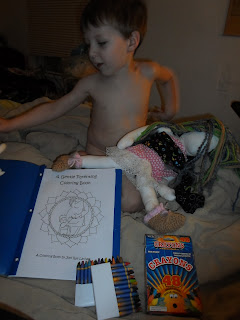 Today Joni Rae, better known as The Kitchen Witch, introduced her newest work of art, a 15 page coloring book filled with beautifully drawn pictures of mothers giving birth in water tubs or on beds, being cared for by midwives, breastfeeding, tandem nursing, bonding with their kids, sharing birth with older children, sharing breastfeeding with older children, bedsharing, baby wearing, organic gardening, composting etc. I had to buy it.. after getting AF today I was feeling pretty low. I needed something happy to keep my spirits up and the front cover and first page had a picture that did just that. It was a picture of a mom who looked just like me with her 3-4 yr old son hugging her very pregnant belly. It gave me hope. I love love this book. I printed out all the pics and Bug and I sat down with crayons and colored all evening. I just can not express enough the joy of coloring pictures depicting our life. Parents who do the same things everyday that we did or do. I think the only thing missing was babies in cloth dipes... though maybe I just missed it. Actually no the picture of the family bedsharing has a visible cloth dipe on the baby. So even that is covered. I just absolutely LOVE this book. Can you tell? LOL. Anyhow if you would like one too go here.
Posted by Green Mommy at 11:52 PM 2 comments:

DIY Elf on a Shelf

Elf on a Shelf, Elf on a Shelf.... right around this time of year that is all I hear. There are pictures all over friend's fb timelines and all over pinterest. Before last year I had never heard of it... now it is everywhere. Last year I decided Bug was still too young. He was 25 months old last Thanksgiving and I thought he would not really understand it too well. I said "Next year I will think more on this...".
Well now next year is here and with only three days to Thanksgiving, I decided I needed to get on this quick! Bug is 37 months this year (3 yrs one month) and completely excited about the idea of Santa. So I talked to Hubby about the elf on a Shelf tradition that all the parents our age have started with their kids. He loved the idea and so I went to order the book. I looked at several stores and quickly realized it was going to cost about 35$.

So I figured well we used to have vintage style elves that looked just like that elf, before our then puppy ate them in what we still refer to as the Elf Massacre of 2008. So I thought I will check eBay. On eBay they were all more expensive than the Elf on a Shelf ones were because of the vintageness of them.
So I thought about it.. realized I had very little time to do all of this anyway because the Elves are supposed to join their families the morning after Thanksgiving. So I decided to just make one. Almost no one I know actually has the book, most people I know either found a vintage elf or bought just the elf part or else found a different elf somewhere else. There are also loads of sites where you can find letters from Santa to include with your Elf when it arrives at your house. So I figured we could have all the fun of it with none of the cost and have a completely one of a kind Elf as well.
Now I had the idea... how to go about it. I scanned pinterest and DIY blogs for ideas... and though I found some truly adorable ones... none were quite what I had in mind. Then I remembered Happy Hannah! 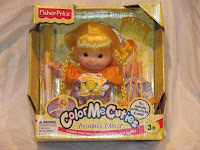 Happy Hannah was a doll I found in my Freshman year of college. She was originally called Yasmine Yellow and was one of the "Color Me Cuties" dolls Fisher Price made in 2000. My friends and I thought she was adorable and I just had to buy her. Happy Hannah became a mini icon for my friends and me and stayed one of my most beloved things until Bug was born. He found her one day and claimed her as his own. I knew she would make the perfect elf but I didn't know how to get her away from Bug. So when I went to find her in his room and sneak her away he asked me where I was taking her. DARN!
So I thought quickly.... "Hannah was selected by Santa to become an Elf. She is going to go to the North Pole and Santa will help her become an Elf and then she will come home to us after Thanksgiving and stay with us until Santa takes her back on Christmas Eve." He seemed excited about this and accepted it easily. I was super happy for having come up with that on the spot. I showed him pictures of other elves from other homes and how they all report back to Santa each night. He was really excited by the idea. 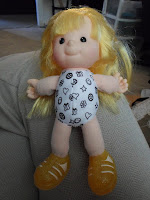 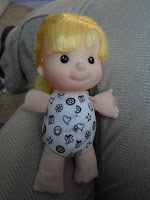 So I started turning Hannah into an Elf. (Away from Bug of course... he watched a movie in our bedroom while I made Hannah in the office). First I took off all her clothes. Then I cut off her hands and feet which as you can see in the picture are kind of huge and very unelflike. That  left her with a soft tummy and openings to extend her arms and legs with pipe cleaners. Once her legs and arms were extended I covered them with a thin forming tape. 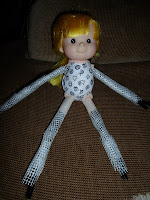 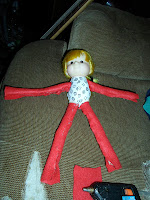 Now with longer legs and arms she looked more elflike. Now all I had to do was cover her body in red felt. I used hot glue to do this part. After that I made her clothes, a hat, fixed her hair and made her mitten hands and pointy curled elf shoes.

And here she is! Finished product! 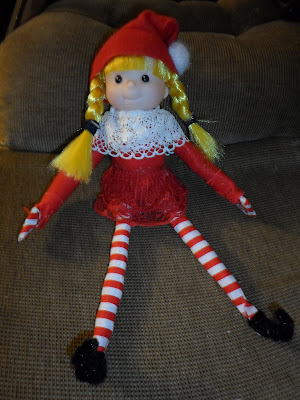 So we all as Green Mommies have that one thing.. that totally ungreen thing that we still haven't stopped doing, be it a gas guzzling car we haven't upgraded or those paper towels we can't give up. 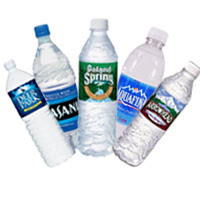 In my life it was bottled water.
Now you may be shocked, could a woman who even makes her own cloth maxi pads really still buy bottled water. The answer is yes and here is why....
A few years ago before I was the Green Mommy (before I was a Mommy at all), and was just a very green newlywed, my hubby was addicted to and I mean had a serious issue with coke.

Now I am not talking about the powdery white drug... I am talking about the brown sugary soda drink of death. He used to buy a 2 liter bottle every day and drink the whole thing. Now as a kid I never drank soda.... at all. It was not allowed and as an adult I so rarely drank it. I was the kid who in college would drink milk or soy milk instead of soda even though it cost more. So as a newlywed I was shocked to realize just HOW MUCH soda my husband was drinking. So I slowly got him to cut down by allowing us to buy bottled water. Slowly over 2-3 years I got him down from 2 liters a day to none at all. Hubby now drinks soda very rarely on special occasions.
But now I had a new issue. By now we were parents and I had started this blog and was on a path to make our lives greener and greener everyday. Bottled water became a thorn in my side on so many levels. First were the bottles all over the house. They were everywhere. Once a week I would bring them all to the recycling bin but they kept piling up everywhere. Second was the green side... of all that plastic. We always bought the greenest bottles we could and of course recycled them but still.... so much added plastic. Third was the dioxins in the bottles. Forth was of course the cost. I begged to switch to brita but it never seemed to work out. Hubby needed ready access to a bottle of filtered water.
Then we found these: 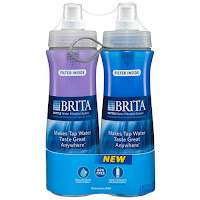 We love them. The water tastes just like bottled but without the long waits for a pitcher to pour through or buying store bought bottled water. You just fill and drink. the filters last 2 months or 256 fills. So this Green Mommy finally finally has done away with the last big ungreen thing in my life. I finally won the battle. We are a bottled water free house!
So what ungreen things do you still battle with? I would love to hear from my readers.

Posted by Green Mommy at 9:42 PM No comments: