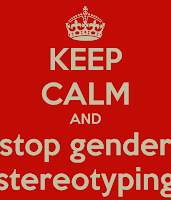 So if you follow this blog, you may have already read the many posts I have made on the idea of gender roles, gender stereotypes, and gender bigotry. My son, who will be 4 in a little over a month, just spent the last 2 months going to the Build a Bear website almost every day to look at and dream about getting a large stuffed BAB Rainbow Dash (My Little Pony). As I have written about before, Bug looooves My Little Pony and Rainbow Dash is his favorite.
So the other day my best friend and I decided we wanted to take him to the Zoo which is 3 hrs away and also happens to be the city that has the only Build a Bear in about a 300 mile radius. So we went to the Zoo and afterwards surprised him with a trip to the Build a Bear Workshop. He of course ran right to the bin holding the Rainbow Dash ponies and pulled out which one he wanted. To my surprise and happiness not one employee commented negatively on his choice. 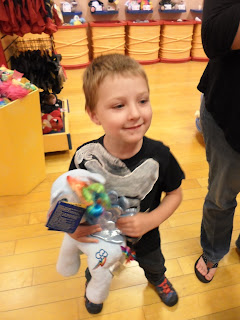 They all seemed to take it as perfectly natural that this cool looking little boy wearing the black Jolly Roger t shirt (I hand painted for him) wanted to take home a baby blue, rainbow haired, sparkly pink eyed, silver glitter winged, pony. I was so happy. I felt like crying as I watched him do the heart ceremony and stuff his pony. He took her up to the counter like a proud Daddy bringing his baby home from the hospital. Even later at a restaurant we stopped at for dinner, the waitresses commented on his choice of stuffed toy positively, proclaiming how sweet and nice it was that he had chosen a My Little Pony.
So after having such a wonderful experience shopping with my son, I was saddened to read not one but two articles today about mothers out shopping with their sons, both about Bug's age, and having bigoted people shout at them.
The first article was entitled, "If My Son Wanted To Dance I Would Kill Myself". The mother of a six year old boy (2 years older than Bug), had been told by her son that he wanted to dance when he got older rather than play sports. She found nothing wrong with it and supported his choices. Later on while they were at his T Ball game she was relaying the story to another mother when  loud angry father of one of the kids shouted "If my son wanted to dance I would kill myself!!!" The mother was shocked and she took her son out of T Ball and plans to sign him up for dance classes.
I found the article so sad. It always shocks me when people have no problems with girls playing sports and doing everything a boy can do, but a boy wants to dance or wear pink and it is the end of the world. As sad as this article was though, the next one is even more so.
This next article was entitled, "What Happened When My Son Wore A Pink Headband To Walmart". In this article, the boy in question was only 2 (about 2 years younger than Bug). He wore a pink headband to Walmart. His mother found nothing wrong with it, because there is nothing wrong with it. Many of the customers thought he was very cute and cooed over the sweet boy. One customer asked if he were a boy or girl. When the mother said "a boy", a large angry man ran over and ripped the headband off the boy's head. He then hit the baby boy across the back of the head and said "You will thank me later little man!" His mother (and I am so proud she did) said "Touch my son again and I will cut your damn hands off". I honestly don't know what I would do if anyone ever did this to Bug. I would probably had even more choice words for him. The man however angrily spit back at her "You son is a f***ing f****". Not one customer stood up for this woman and her son. She had both her sons with her the two yr old who was hit and a 5 month old baby. This man physically and verbally attacked a 2 yr old boy in front of his mother and baby brother for no other sin than wearing a pink headband in public. This is a picture of the little boy in question, wearing the pink headband. He is utterly adorable and so sweet. For anyone to sit back and watch a full grown man attack this boy is a crime. For the man who did it, well let's just say I hope no one ever does this to Bug because they will regret it. I would of had the cops there in a few seconds.
All in all I have to say between reading these two articles as well as the personal experiences I had this week, I am deeply sorry for the mother's whose son's were attacked.
As for myself and Bug I can honestly thank the staff of both the Build a Bear Workshop, as well as the staff of the Melting Pot restaurant (both in the Destiny USA mall in Syracuse NY). Your open minds and                                                                   kindness towards my son warmed my heart. Thank You.