So for anyone who follows this blog you will know that I am a HUUUUUGE proponent of cloth diapers. I will go out of my way to do just about anything to help a family make the switch.. from advice to showing them where to get the best and least costly all in ones, to how to prep diapers... and so on. That being said I must now retract a good review I did for a diaper company. Happy Flute Diapers  sold by goodseller003 on eBay are not good. The diapers themselves are fine and wicked cheap but the seller is difficult to work with and not helpful at all. We ordered three orders of diapers from her one of 4 one of 3 and one last one of 5. The set of 5 never came. After 45 days of waiting and being told repeatedly to just keep waiting and to "not bother her" I opened an eBay case about it. Eventually eBay paid me back for the diapers and I then searched for a new vendor of homemade cloth diapers that used tracking numbers. "Fool me once...." This time I was not going to use a company that didn't track my package for me. The diapers were slightly more expensive but this vendor I found SunBaby Diapers or vendor Sunbabydiapers on eBay not only used tracking numbers but instead of ordering 5 separate diapers and having her ship them all separately like Happy Flute did, she has it set up so you pick the colors and patterns you want and the ammount and it's all one order. It was quick and simple. I was very happy but not as happy as when I got them. These unlike most adjustable grow with baby pocket diapers which have usually three settings "small, medium and large" these have four settings "NB, small, medium and large". They also use the softest fleece I have ever felt as the inner layer and the liners are made of that too. The patterns are equally cute and the fit is snug and the are really absorbent. They aren't as absorbent as the Happy Flute diapers were but that could be solved by using a different liner or only using them during the day... they work great for daytime. 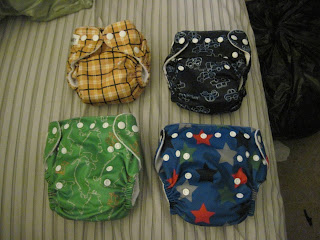 This shows the four different sizes that the diapers can be adjusted to. Right now my son is on the third one and he is 25 lbs and 35 inches tall so they fit most size babies.
Here all five we bought. 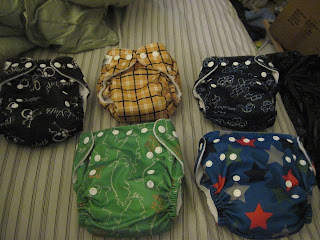 In case you can't tell the patterns are Skulls, Plaid, Cars, Animals, and Stars.
Posted by Green Mommy at 2:04 PM