Our Journey Has Come To An End

What journey is that? Well my breastfeeding journey.
When Bug was born, he and I took to breastfeeding like breathing air. It was so ridiculously natural. We just knew what to do and everything went amazingly. I really can not express just hot beautiful that time was with my son. I do not say this to brag about how "great I am at breastfeeding", but to explain a bit more about the rest of my journey. When Bug weaned at 9 months I felt I was cheated. i was still lactating but he wanted nothing to do with me. He had decided our journey was over. I was depressed, I cried, I felt I failed my son, and at being a breastfeeding Mom. I never felt ready to be done, even thought about trying re latching. Hubby was not on board though because he said "it's one thing to nurse a toddler, it's another to start nursing a toddler after they weaned as a baby." I suppose he was right. Still I knew that was not the end of my journey as a breastfeeding Mom.

4 years later Monkey was born. I was so enamored with her. She was perfect, so tiny and pink and grumpy faced. She was my perfect little Monkey. I couldn't wait to feed her, for my milk to come in and for us to start our wonderful amazing journey, like I did with her brother.
Then I fed her for the first time....
Maybe it's just going to take awhile I thought, we will work at this. It can't keep hurting forever...can it? After about 6 months we finally had gotten our breastfeeding to work enough so I wasn't in constant pain. I was so proud we made it to 6 months and so proud that we were finally starting to be a team that worked.
Then she got teeth! She began biting me around 6 months and over time the biting, bad latching (we would latch fine at first but she would start to twist and stick my nipple in her molars), she began pinching my other nipple constantly, scratching and slicing it with her sharp nails.

Still despite that all we made it to 12 months. I was so super proud! I did it. I nursed a baby to 12 months! So I began trying to wean. She refused. I thought, ok well she is so little I will keep going awhile longer, she needs this. That thought kept us going another 6 months. At 18 months I was very much done! I tried everything I could think of to wean her. For me our journey had become a chore. But she did not want to wean and I didn't want to force her. I knew when the time was right we would BOTH know. So her 2nd birthday came and went and we began cutting back. Only nursing at night, or nap time etc. Another 6 months went by. She was 2 and a half and still no end in sight. Her biting, scratching and bad latching were getting so I would cry and push her away when we nursed. I felt like even one more day would be too much. I started to hate breastfeeding. So I took a little time to rethink and had a few talks with River. If she didn't want our time breastfeeding to be completely over then we were setting up some rules. Only at night before bed and no biting or pinching or scratching. Things went ok for a while and for another almost 3 months it was ok. We were enjoying our time together again. For a few months breastfeeding was actually great again. Now I don't want you to think that I nursed a kid to 33 months in constant pain or that at no point was this good for me. There were many many nights where it was amazing and whole periods of time that nursing her was working great and we were a great team.  It's just that over the whole 33 months there were a lot of times I wanted to throw in the towel, and finally this week.... I did.
On Saturday night, the 4th after a particularly painful nursing session, I felt like my skin was crawling, I just couldn't take one more minute. I pulled her off and went to bed. She cried and cried but I knew in that moment we were done. The next morning, after having slept on my decision, I knew I had not changed my mind. I knew this was real. We were done.
So I began looking into ways you can celebrate the end of your breastfeeding journey and help your toddler wean. The recurring theme was to write down the Story of your Journey, which is what this is. Another was to get them a gift that symbolizes growing up. I decided to get her a toy that teaches her her colors. It is a toy we got recently in my classroom and the kids all really love it. I thought what better way to symbolize growing up then to get a preschool toy to learn from. We also read a book I found on Amazon, called "I'm a Weaned Kid Now." It is absolutely meant for exactly our situation, for a almost 3 yr old or older who is weaning. A child younger than that probably would not really relate to the book. Monkey really understood the book, even saying afterwards that "Daddy and Mommy are so proud of me!", which was a recurring theme. The girl in the book is named Chloe and she drinks "milkies". I greatly recommend if you read it to your child you use his or her name and the word you use for nursing. Monkey's is "Baboo". This however made Bug laugh because he ran in to ask "does it really say 'baboo'?'. 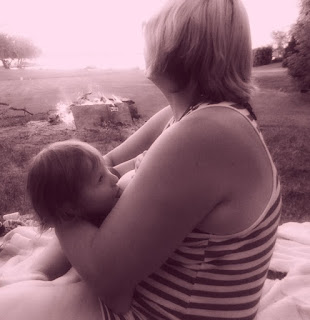 So after 3 full days, she is starting to be ok with our choice. She understands what weaning is and that she is a big girl and we still love her the same. I am so beyond proud of how far we did make it and of her finally being ready to wean. It has been a little sad for me because she is our last child so I will never breastfeed a baby again, but that is life. Eventually you have to stop or you will have a 10 yr old nursing or 20 kids. I made it 33 months with Monkey and 9 with Bug so I spent 42 months breastfeeding out of the last 8 years. 3 and a half years. I think I did well. Life is cycles, life is journeys. My journey as the mother of babies, of nursing, of changing diapers, and midnight feedings etc... is over. Now I am the mother of a very curious, sweet and silly preschooler and a smart, sassy, creative and kind almost Tween. Life moves one, and so do our children. Time can feel cruel but also with each year brings a new adventure, so with that in mind I release this adventure behind me and look forward to the new ones.