A Hopeful Story About Breastfeeding In January? 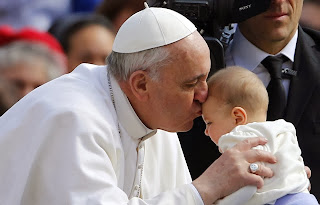 This is 2014. When I started this blog it was 2009. That was almost 5 years ago and it was a very different world as far as Breastfeeding goes. Almost every January and February since I began this blog there have been countless stories of people bashing breastfeeding, telling women they can't breastfeed in public, harassing breastfeeding mothers etc. However this year I found nothing. Instead I came across a wonderful story about the current Pope, Pope Francis, telling women to breastfeed their children in public because "they are the most important people here". This took place at a mass baby baptism, in which he told the mothers of the babies to feed them without thinking twice. I personally love this Pope, I have followed him from his election last year. He alone has given me renewed hope in Christianity. I mean after all Mary breastfed Jesus, why would we deny our children the same nutrition and comfort that Jesus was given. I see this as proof that in just the 5 years since I became a mother breastfeeding has come forward by leaps and bounds. It is so much more accepted and  commonplace. When I had Bug, I only had a couple friends who breastfed their babies, and not because my friends tried and couldn't do it, but because they didn't even try, most had the attitude that it was icky, or would take away from their relationships, or just simply be too hard. Now 5 years later I don't know barely any moms who haven't at least attempted to breastfeed. I am so proud of how far breastfeeding has come.
That is not to say however that there isn't still prejudice, and doctors shoving formula at new moms, or public places that frown on or ban breastfeeding mothers, there are, so we need to continue to push forward, normalizing breastfeeding until it is entirely accepted and even preferred over formula use. Formula was never intended to be a replacement for breastfeeding, but as a tool for helping mother's who could not or can't breastfeed. Educating young mothers that breastfeeding is not "icky", is vitally important.
Posted by Green Mommy at 9:34 AM