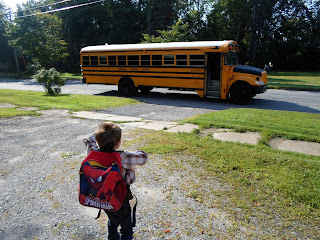 Well it is official, we are now a family with a school age child. He began his first year of school this last week. It was a very big deal for us. As first days go it was kind of a wild one. He had gone to visitor day the week before and all had gone quite well. We waited with him for the bus, he was picked up just when we thought he would be, and we snapped some adorable pics of his standing waiting for the bus and running for it. However when it came to the real first day of Pre Kindergarten we had a rough start. We began the day with a good breakfast, and cute clothes picked out the night before, but I just couldn't shake the feeling that something was going to go wrong with his bus schedule. So I called the school to double check his schedule. I expected the secretary to rattle off his exact schedule and chide me for being silly but instead the schedule she read off to me would have resulted in my son being dropped off across town in front of a perfect stranger's house. I was floored. I trusted these people with my child. I had written down his schedule for them no less then 3 times. So I told her that it was not right and that I would like her to take down what was the right one. I was told "that is not how we do things, you need to write it in a note and give it to his teacher and then she will give it to me and I will tell the bus garage". I think I nailed on the head why they make giant mistakes that could lose children! What a round robin of insane bureaucratic nonsense! So then I said "alright well thank you" hung up and wrote the note. 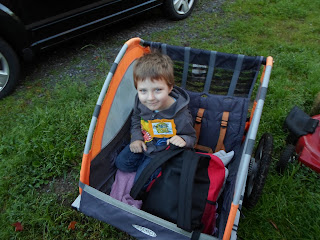 I had just finished and put it in Bug's backpack when I looked at the clock. It was 7:15 and Bug was due at school at 8:30, so I knew we had about 45 mins before the earliest the bus would arrive. No sooner had I thought that, then I saw the bus slow to a stop in front of our house. I ran out freaking out. Bug was no where near ready and there could not be anyway that this bus was here for him... he must be here for the highschoolers that are due at school at 7:30. I asked him "You are not here for (my son's full name) are you?" "Yes" "But there is over and hour until he will be at school and that is so long.. too long for a little guy to be on a bus, we were not expecting you until 8 at the earliest." "I can't wait, is he ready?" "No he isn't because there is over an hour until he is due at school". At this point the bus driver basically slammed the door in my face. I was so angry. 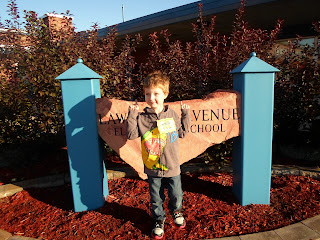 So I had to go back inside and comfort my now crying child who was distraught at having missed his bus on the first day of school. So undeterred I let him finish getting ready, at his own pace and we loaded up everything in the bike, and I biked him the 2 blocks to school. I decided that until they change his schedule I would just bike him every morning. Why not, better for him, me and the environment. So instead of the traditional waiting for the bus pics I got a few really cute ones while we were waiting at the school. When all was said and done it was a wonderful first day. I got to actually walk him to his room, kiss him goodbye. It was great. I guess things happen the way they are meant to happen.
I think that all in all we had a wonderful first day of school.
Posted by Green Mommy at 9:54 PM