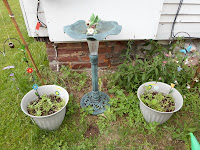 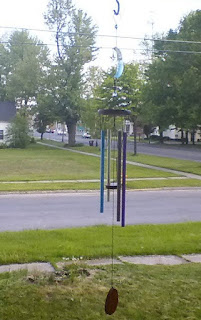 Well I promised happier subjects, so I thought I would begin with a post about some of the creative projects I have been up to. Since I lost Asya I have spent the last 14 weeks keeping as busy as I can with a variety of crafts and projects. One of the things I wanted to make to help my yard and garden be more peaceful and beautiful was windchimes. My wonderful husband bought me a beautiful set for Mother's Day along with a gorgeous birdbath but I knew I wanted windchimes all around my house.
So I began making some. The first two sets I made I started with cheap windchimes from the Dollar Tree. The kind with a metal shape like a snail or butterfly and then a few short strings with metal dangles hanging from them. They aren't much but it was a start. So I bought a snail and a dragonfly. 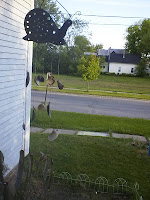 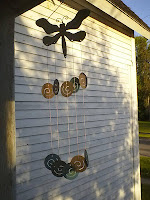 With the snail I removed all the metal dangles and then I strung new strings of pink cotton thread that were about the length of my arm. Then I hot glued wire loops to the back of seashells. I then strung them in patterns from the snail. The result was a very pretty windchime.
For the dragonfly I took the metal dangles from both sets of dollar store windchimes and hung them from the same pink thread. I alternated the colors and created a very pretty pattern.
The last set I made I made entirely from scratch. I used green wire to form a base loop. I wove three strands to strengthen it. I then bought some "table scatter" from the Dollar Tree, which is really pretty beads. I made a few more shells and a a few spirals of green wire. Then I strung it all together to make my windchimes. They came out really beautiful. I was very proud. 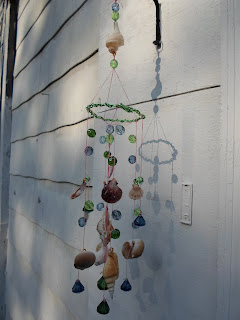 I then added two miniature windchimes to my flower pots which completed the peace and serenity of my yard. I have three sets on the front porch and three sets in the backyard. So wonderful, it really feels like summer now.
Posted by Green Mommy at 12:09 AM