Do It Yourself Kid's Tees 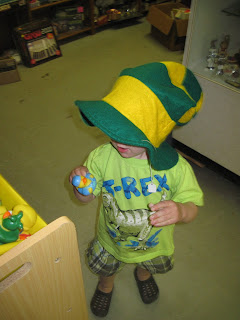 So two years ago my son had been given several dino tees that he LOOOOVED! He wore them everywhere. However they were beginning to get a bit snug and by this summer they were downright too small. So I thought about what it would take to replace them and I knew it would involve a really long internet search and probably 10$ each per tee. Then I remembered some cloth dino appliques a friend gave me. It had on it 4 very large dinos (also some smaller ones too). I decided that I would just make Bug the dino shirts he wanted and bonus with a biologist Mom, the dino names will be correct and spelled right too which is a bonus. So I bought some fusible webbing which was about 2$ for 2 yds. I bought a rainbow pack of puffy fabric paint which was about 10$ and I bought 6 t-shirts ( I will explain why 6), size small kids (5-6) at the Dollar Tree.
So 4 of the shirts I designed with the dinosaur appliques. 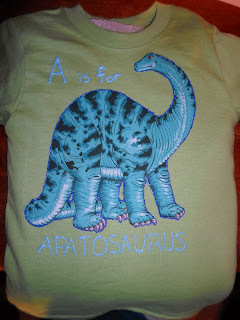 Apatosaurus in green and blue 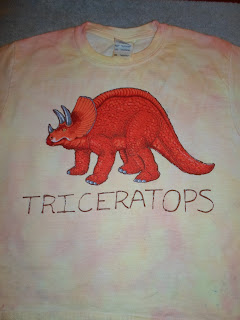 Triceratops on a white shirt that I tie dyed with water and fabric paint. 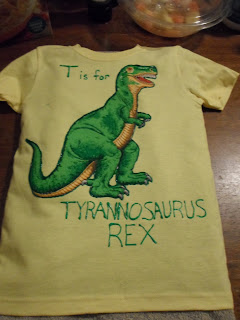 T-Rex on yellow with green 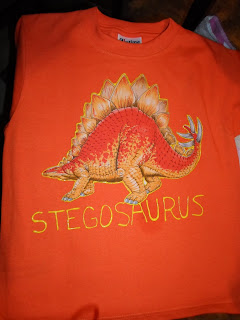 Steggy on orange with yellow 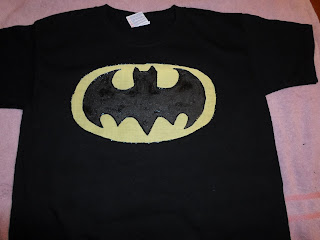 So then with the other two I decided to make my own appliques. I asked Bug what other shirts he might like and he said a Batman shirt and a fuzzy teddy bear shirt. So for the batman shirt I made an applique of yellow cloth on a black t shirt and then hand drew the symbol in pencil and painted it with black fabric paint. I then touched it up and traced the design with black fabric paint. 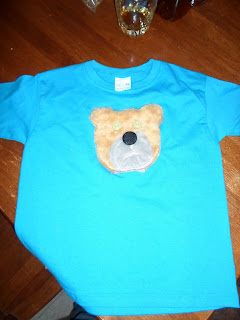 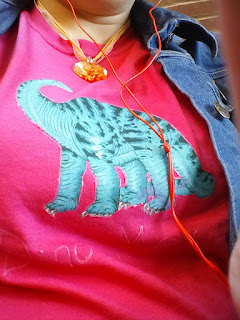 Then with the Teddy bear shirt I cut out the face pieces from fake fur cloth and sewed it all together and then stitched it to the shirt. I finished off the face with button eyes and a nose.

After we were all done with it I bought two more shirts both woman's sizes, one for me and one for my MIL. The one for me I used a smaller dino decal on and painted it with the words "Dino Mommy". The one for my MIL I painted with Bug's handprints and gave it to her as her Mother's Day gift. 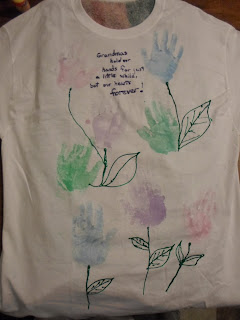 All in all we spent less than 20$ in supplies to make 6 kids shirts and 2 adult shirts. Considering most adult shirts run around 12-20$ each and kid shirts run 5-10$ I figure I saved myself roughly 80$.

Email ThisBlogThis!Share to TwitterShare to FacebookShare to Pinterest
Labels: dino tees, do it yourself tees, green mommy, handmade, handmade crafts