There are many foods that you can grow at home from either seeds or stalks taken right from your grocery store food items. This sort of recycling doesn't start out organic but the food you grow from these will at least be healthier as it will no longer be treated with chemicals and pesticides. So far in my research and trial on my own I have compiled a list of the following foods. Onions, Celery, Lemons, Oranges, Grapefruit, Avocados, Garlic, and Leaks.
Garlic, Onions and leaks are pretty easy. Just soak them in water until they sprout and then plant them sprout side up. I decided today to plant some that I had found actually. 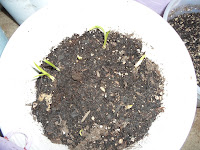 I had left garlic I bought from the store so long that it had all sprouted on it's own. 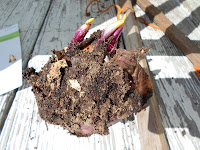 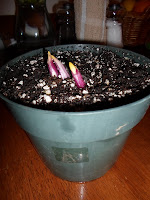 I then later found a red onion that I had thrown in the compost, that instead of decaying had instead sprouted. I went to fertilize the garden beds and when I dumped the compost in I saw this whole onion with several sprouts growing out of it. I was so excited! So I planted it.

For instructions to grow an avocado plant check out this. It shows you step by step instructions. 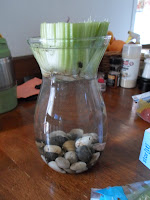 I tried out growing celery this week as well. You just chop the end off the bunch and sit it in water until it begins to sprout. I will update mine but so far this is how it looks.
For lemons, oranges and grapefruit you just snip the seeds out of their protective coats and soak them in water until they start to show roots. Then place them on top of a pot filled with soil and place pebbles on top. The results are a small lemon plant that smells like lemons. I don't think it will produce fruit but it smells good. I am going to be trying this this week. I found the instructions here.
So here you go.. have fun and if you have other foods you have grown from the grocery store produce let me know. I know you can also do potatoes but I haven't tried it yet... I plan to grow them this summer.
Posted by Green Mommy at 9:52 PM

Email ThisBlogThis!Share to TwitterShare to FacebookShare to Pinterest
Labels: earth month, foods you can grow from the foods your eat, organic gardening, recycling food, starting plants at home