The Story of Us

I decided today to write about something very different from what I normally write about in this blog. Now that our family is almost complete (we only ever wanted two children), I thought I would write up the story of us. I figure why not have a bit o fluff every once in a while.

So The story would begin I suppose when I was 16. I was living with my Grandmother. There was a winter ball formal coming up and as someone who never went to any formal dances (not even prom) I was actually excited for this one. My friends and I had all decided to play up the fact that everyone thought we were lesbians anyway and all go together. There were guys in our group too but the preps and jocks didn't seem to think we could possibly be with them. I wore the literally ugliest silver velvet dress in the world. Apparently I was under the delusion that simply because it was a winter ball that I needed to look like a Christmas tree ornament. To complete the image my Grandmother gave to me as a gift a day with her hair stylist. A woman who excelled in the hair of 70+ yr old women. So the result was this. Even for 1999 this was unfashionable and dowdy. I a nerd through and through thought I looked like a princess. So every princess needs a prince right? Well sort of. 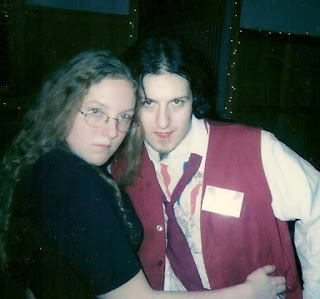 That night my friends brought their friend, an older guy who was out of high school and worked at a movie theater. OOOOOOH... yeah sexy right... not so much? Yeah but think like a 16 yr old nerd.... He was hot. This is what hubby looked like that night. He is with our still good friend M there. So this sort of gothy, bad boy, older guy, who I thought was way hot danced with me most of the night. I was smitten. Had he asked me out that night I would have said yes... ended up wrecking my life and we wouldn't be here today. But I was smarter than that and so was my friend J who told him to never touch me ever, because I was a virgin, a good girl, and 16. So we parted ways... never to see each other again.... at least not until my Junior year of college...aprox 5 yrs later. I was with my ex fiance and he was hanging out with our mutual friend who my best friend at the time was trying to date. So the 5 of us ended up going to a movie. At that point I did not remember this now snarky and obnoxious guy as the dreamboat from 5 yrs previous. I thought he was a jerk. He thought my fiance was a jerk and thought I was hot. 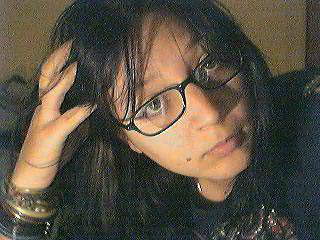 So another year passed and my best friend and the guy she liked had never actually ended up together, but one night we were coming out of dinner and we bump into none other than the guy she liked and my Hubby. Again we did not recognize eachother. This time I looked more like this. Much more punk rock with black and green hair and an I don't care attitude. 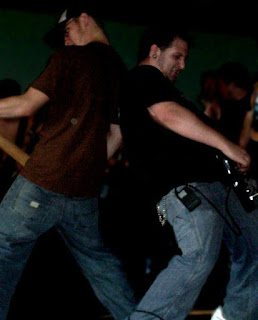 He looked like this. All hardcore and rocking out in his band. He was still a bad boy though and in a lot of ways very bad for me, but I was very good for him. Somehow within just a few dates and a few hangouts we had fallen head over heels in love. It was a rocky first year. He was older, bruised emotionally, and I was naive and stubborn with the thought that I could mold him. At the end of a year we broke up. It was messy and awful. I at that point never thought we would be together past that point let alone happily married for 7 years with two kids. Yet he surprised me. In a grand gesture he tried to win me back with poring out his feelings, and proposing. I said no. I said that when I felt he had truly proved his love I would say yes. That happened about a month later. We moved in together about a month after our engagement was official. I felt the battles we had overcome were a testament to our really being in love and truly having dealt with the hardships of life.
So 9 months after we moved in together came our big day. We were married outdoors in a beautiful gazebo. We had a 1940's style jazz wedding. Everything was black and white and pearls and martinis. 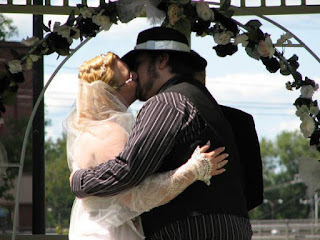 That was August 5th 2006. Almost 7 years ago. As you all know in September of 2009 we brought our wonderful Bug into this world and in Dec of 2012 we found out that this September we will be bringing a new little one into our family. So that really is.. the story of us. It's funny, it's sad, it has ups and downs, but it's honest. It wouldn't make a blockbuster movie but it also is the most romantic story of my life.

Email ThisBlogThis!Share to TwitterShare to FacebookShare to Pinterest
Labels: story of us