The Biggest Handmade Christmas Project Yet

When I was five years old, my parents decided to give me for my birthday a whole new bedroom. We had just moved into a new town and a new apartment and the room that was mine had the most amazing pink carpet in it already. So since I literally LOOOOOOOOVED pink they ran with it. On my birthday I finally got to see the room which now had a brand new queen sized comforter, a twin sized bed, a pink end table with a white ruffle and pink lamp, white bookshelves, a white toy box, a pink bedskirt, pink sheets, a pink comforter cover, pink bookends, etc. I still to this day remember the feeling of opening that door and seeing that fairy wonderland for the first time. It was amazing.

It was from what I remember similar to this room I found online. This isn't exact but similar.. mine was even more pink if you can imagine it.. with a plush pink carpet.
So we decided that this year we were going to redecorate Bug's room for him for Christmas. He chose a dino room. We offered Pirates, Dinos, or Space. I found a few rooms online to use as inspiration. I liked this one the best.

So when he selected a dino room I started to list all the things we could do to decorate his room and I realized that he already has quite a bit of dino themed things which I can use, as well as having an almost full can of light green paint.
So I have started gathering some of the projects I already have done that will work for his dino room.
Last Christmas I made him a dinosaur pillow that was a fleece tie together. It is adorable and really would work well for his dino room. 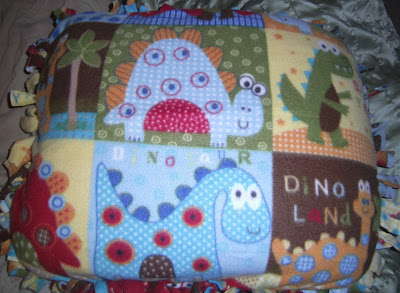 For his first birthday he got a dino sheet set and blanket that also will work well for his dino room, though I would like to make a comforter cover for his big comforter (which is the same one in fact that I received on my 5th birthday.. it came with me everywhere I ever went and now is my Bug's. 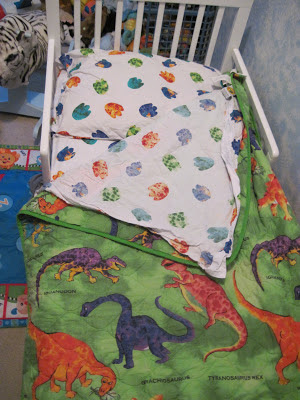 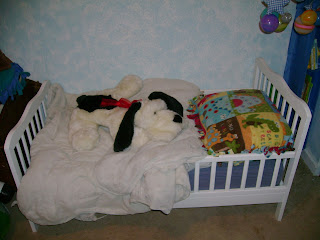 For this last birthday I redid my childhood rocking chair for him with matching dino fabric. 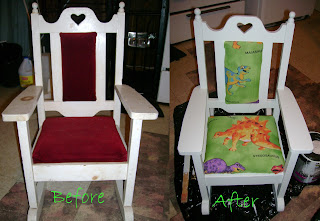 All in all I think between thee things, some new paint, some dino decals, some wall art and a new rug.... Bug will have an awesome dino room for Christmas.
Posted by Green Mommy at 11:24 PM