The Truth About Being a Mom

Being a Mom has to mean one thing (besides the you know feelings of love and that they are the most perfect human being to ever walk the Earth), and that is doing the same things over and over and over. So much so that you begin to look and sound like a crazy person. You clean one room and five seconds later you are cleaning it again. You change a diaper and a few minutes later you are changing it again, you say "Don't touch that" and then you look back and guess who is touching it AGAIN. Everything you do you do over and over and over. Sometimes this takes form in odd ways. Such as today I had just finished part of Bug's Birthday party decorations for his Rainbow themed party. I was making beaded streamers out of star beads and yarn. They looked fabulous and the money saved was worth the time spent. I got up to help Hubby with dinner and then came back, only to find that my scissors were out, in my son's hand and the streamers had been cut into tiny little pieces. I couldn't help it, I started to cry... which turned my son's pride and joy at having "helped Mommy", to realizing he had not done something good. So he suggested "Mommy you can sew it?" Sigh.... some things you can't just sew kid..... So I close this with a picture of the destruction... as I set out to remake these... AGAIN! 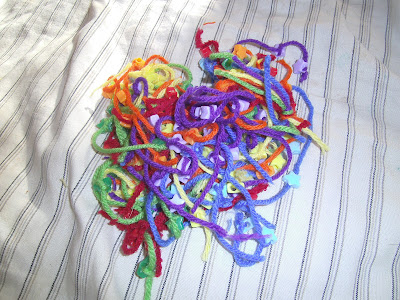 Email ThisBlogThis!Share to TwitterShare to FacebookShare to Pinterest
Labels: Being a Mom, homemade decor, truth about being a mom, truth about life, trying to stay cool