So as promised here is my review of the Chateaugay Renn Faire, some new vendors to check out, and pics of adorable kids in garb. Overall as a parent of a child under 10 it was really great. That being said however there was little to nothing to offer hardcore Rennies, SCAers, or even just people without kids. The biggest complaint I heard was from people who had actually been volunteering to help run things or act in it. That was that the head of the Faire had alienated most of them by the end of the day. The other complaint was that it was all for the kids. MY only complaint was that much of the ceremonies and songs were a blatant rip off of the Sterling Renn Faire, which was either deliberate or accidental but it was uncomfortable for any lovers of Sterling. It was a bit like having you brother say he is going to make a new TV show, that is totally cool and never been done before and he has this great new character to suggest and then you watch his homemade pilot he is going to send in and it's him running around with a Fez on his head, shooting a sonic screwdriver and trying out a fake British accent. Do you say "Oh dear God what have you done you've ripped off Doctor Who" or do you smile nod, and pretend you don't know? So complaints aside, for children and parents of children it was awesome. Cross a small country faire with a renn festival and throw in a bouncy castle and that was what it was. The kids could get horse rides, they could get face paints, there was a bouncy castle, there were pools, a playground, a pirate treasure hunt, food, vendors, shows, songs, magic, etc. It was small and low key and at no point did I feel like I was going to die from exhaustion or that it was not meant for children or that it was too fastpaced and insane for kids. Sterling always makes me feel that way. We HAVE TO make an entire day of it or it's not worth the money. So we leave at around 6 AM and get home around midnight, we see from opening to close, and even a conservative family is going to spend between 300-500$ there. We spent less than 100$ yesterday and that was WITH buying stuff. Sterling is supposedly for kids too .. but the hills and winding paths, the booze everywhere, the high prices, the very funny but very risque comedy troops, and the several thousands that flock there daily, make it not the best place for parents of wee ones to go.. something we learned last year. So it honestly is my hope that Chateaugay builds on their successes, perhaps fixes a bit that went wrong and comes back next year because parents of wee ones would enjoy that Faire a LOT better than Sterling.
Now onto some pics. 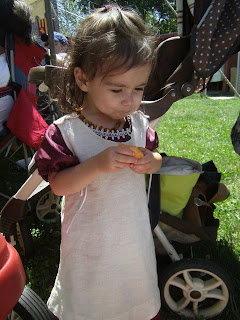 Here is E sporting her handmade apron dress and chemise. The apron dress I had made originally for Bug's Viking garb when he was 5 months old. It was his over tunic. The chemise I made out of the lining of a jacket. I wanted to match her mother's chemise as close as I could. 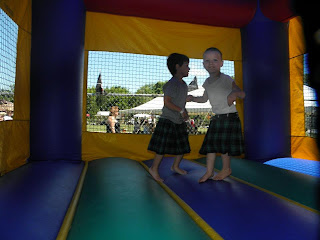 Here are the boys. Bug looks way bigger here.. not sure if that is a trick of the camera or he is bigger now... J and Bug are wearing matching kilts I handmade out of upcycled wool plaid from a flea market. 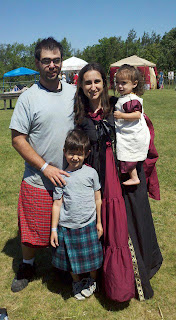 Here you can see a happy begarbed family. I wanted to have the kilt I made for Brandon match the one I made for J but it was hard enough to find plaid fabric anywhere in time. With Liz and E in maroon though actually J's kilt doesn't match. I may try and make him a new red one for next year and use the fabric from his to length Bug's. 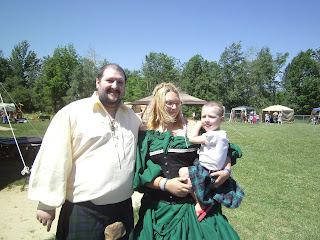 Here is our happy begarbed family all in green. Hubby's kilt is from kiltmart.com as is his shirt. He actually made his own sporan. I made Bug's kilt of course, and most of my garb is also handmade. 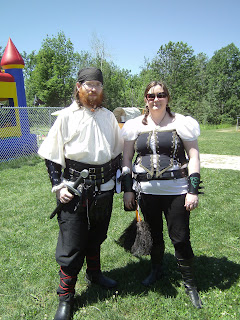 Here is Nikki and Brandon, Bug's godparents. Bedecked in there viking and piratey garb. 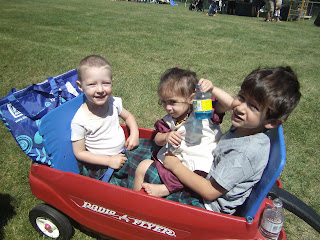 Here are the three kids together :) 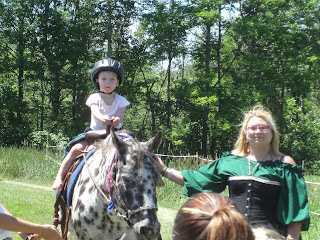 Last but not least here is Bug on his first ever horse.

Now I also wanted to talk a bit about a few of the vendors that were so awesome but right now they are escaping me... so I will do a separate post about that with names and links to the businesses.