So I have spent the last week sick. I don't mean sniffly, achy sick. I mean don't leave the bathroom without a bucket, skin has turned green, can't keep down water sick. Why? Because of course I have a 2 yr old. Why does any mother get sick? She sends her child to a day care, or school where they interact with other people's children and inevitably bring home the plague. So it all started when I went to pick up Bug from daycare last Friday. A little girl was ralphing into a bucket nearby as her parents were trying to get her out the door. The very next morning we woke up to a similar scene with Bug which involved washing both his bedding, ours, and finally leaving him resting on a makeshift couch bed with a bucket nearby. The next morning I woke up and went... "OH NO" and ran for the bathroom.
So I told you all that to tell you this. I suck when I am sick. Now I don't claim to be the world's most perfect Mom but I do try to always do what is best for my son and hold myself to a high standard because I write this blog which of course I could not write honestly if I didn't really live this way. But when I am sick......... all bets are off. I am a really really bad Mom. So here are a few of my sick week stories.
The other day (after a particularly bad bout with this stomach flu) I was dragged into the kitchen bright and early by my chirpy son to make his breakfast. I scanned the refrigerator and announced.."there are grapes?"  Bug gave me a look that plainly said "You are not cutting it Mom". "Can I have cereal?" "Sure hun here" I handed him the box of Kashi Vanilla Squares. I am not proud of it ...lol. So he ate dry cereal out of the box and ate grapes.
Another day I was trying desperately to sleep.. I was in between sick bouts and just wanted to catch up on sleep so I put on netflix kids and let him watch episode after episode of whatever he wanted which ended up being a ton of Wonder Pets (not my fav show). I woke up to him looking for wipes and asked him why. He told me "I need to clean up". I looked to see what he needed to clean up and realized my husband's side of the bed was covered in lotion including his laptop. OH boy!
So today I tried to make it up to him a bit. I was feeling a lot better by mid morning  and as hubby was laying in bed with us watching a movie I asked Bug what he wanted for breakfast and he said "Pancakes" I laughed and said "Mommy isn't feeling thaaat good... how about a bagel with cream cheese? I know I have been slacking in the Mommy department lately kiddo" Bug just rolled his eyes and said "Yeah Mommy". My husband laughed so hard.
So by dinner I was feeling extra guilty and for a few moments hadn't run to the bathroom so I decided to make a gardenara penne pasta from scratch and top it off with 1-2-3 cake in mugs with vanilla icecream for desert.
So here is what I did. 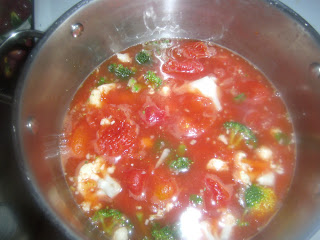 First I opened a large can of whole tomatoes ( I didn't have any of my own on hand so I used store bought) I chopped up a handful of fresh broccoli, one of fresh cauliflower, and one of fresh carrots. I added sea salt, pepper, paprika, onions, garlic, and fresh basil from my herbs that made it through the winter. I added two can fulls of water (using the can from the tomatoes). I let that summer down for about an hour. I then cooked a box of penne. I left it slightly uncooked (just slightly harder then cooked. Then I added it to the veggies.It continued to cook in the sauce. After the pasta was fully cooked I dished it up and sprinkled a little parmigian cheese. Here is the finished product. 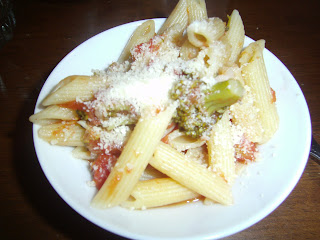 It was delicious!!!
Then for dessert I used a recipe that I found on pinterest. It was for 1-2-3 cake. You mix one box of angel food cake mix with one box of any other kind of cake you want. I used chocolate. Then you store the mixture in a container or ziplock bag. When you want a small amount of cake you mix 2 tablespoons of water with 3 tablespoons of the cake mix in a mug and microwave it for 1 min. I topped this with vanilla bean icecream and Bug and I ate every drop. 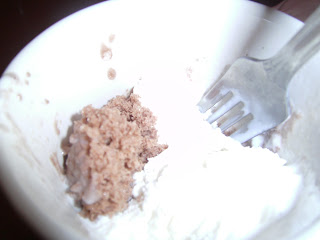 I probably shouldn't have because I am not 100% but for right now I am happy I was able to shake off this sickness enough to let my good momminess shine through. Bug's reaction? He keeps telling me how much he loves me and I got about 10 hugs tonight. :)
Posted by Green Mommy at 9:13 PM