So somehow I have managed to make it 28 yrs as a DIY guru (well at least the last 15 yrs or so) and had yet to make homemade apple butter. How I have no idea. Nothing says Fall in NY like apples and with that goes applesauce, apple cider, and of course apple butter. So I decided I was going to make some and so my cousin and I were each given my Aunt's recipe. Her recipe was pretty basic apples, cider, cinnamon, brown sugar, nutmeg.... a few other things I can't remember now. So I set out to make my own but realized I was out of cider. Now normally this would not be an issue since it is fall and every grocery store in NY carries locally pressed cider in abundance. However today Bug was sick and it was a damp bleary cool day so I decided to keep him inside and not walk to the grocery store with him. So I searched the kitchen for a replacement. I decided that usually white grape juice might just work. I figured what could it hurt.. worst case scenario we end up with interesting applesauce. 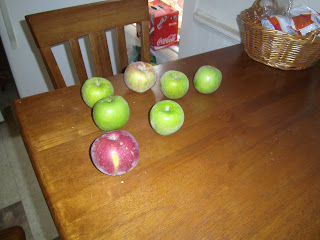 So I peeled and chopped the apples. I started with a mixture of some baking apples (I don't remember the name) and some Granny Smith. 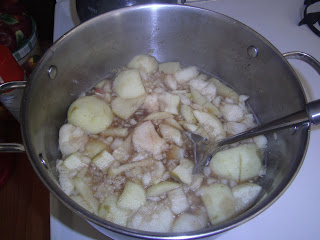 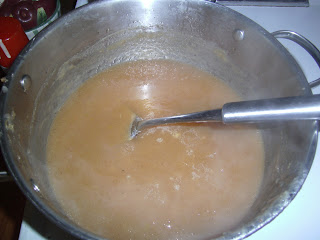 Then when it was a soupy applesauce I blended it in the blender and returneed it to the pot. I simmered it down until it was APPLE BUTTER. 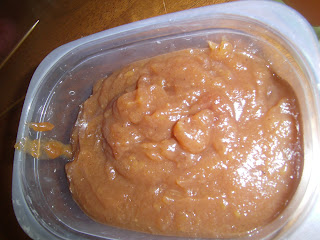 It was without a doubt the best tasting apple butter I have ever had!!!