Smoking... bad for you and the environment 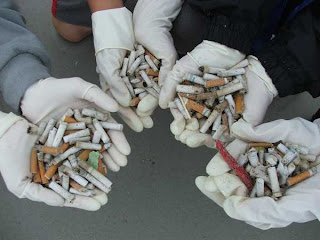 So I was walking around campus today and started to see something strange. People everywhere smoking. So often around town I see so few people smoking anymore. With NY taxes on cigarettes at an all time high the poorer % can't afford them and most people who can afford them have quit for their health or their children's. So what does that leave if most of the population has quit. That leaves the young and the old. The old for the most part generally speaking don't care if they are polluting their bodies because they have smoked their whole lives and they will continue until death most likely from lung cancer or emphysema. Anyone between the ages of 10 and 25 most likely still smoke because they haven't yet decided to have children or they think that the "coolness" factor outweighs the deadly side effects. What caught my eye on campus today wasn't just the fact that kids were smoking, it was the fact that many of them had "Go Green" plastered on their t-shirts, or "Recycle, Reduce, Reuse" on their notebooks or bags. Yet there they were sucking down a death stick.
If you have already noticed this blog post is very opinionated and yes biased against smoking and smokers then yes you are right. When I was born my mother smoked. I am pretty sure she smoked during her pregnancy with me too. She didn't just smoke cigarettes, she also smoked pot. It wasn't until my sister was conceived that she thought it might be a good idea to give up pot and maybe not smoke during her pregnancy. By the time I was about 5 (old enough to remember) my mother was a carton a week smoker. Sometimes more. She smoked inside the house and often blew the smoke right all around us. Fast forward 28 years. I now have asthma. I had undiagnosed asthma as a child but my parents never treated me for it. When I was 20 I found out after I got walking pneumonia. I have had in the last 28 years asthma, walking pneumonia, about 10 cases of serious bronchitis, two bouts with tonsillitis (the last one the doctor warned I may have to have them removed if I get it again) and of course severe allergies to among other things CIGARETTE SMOKE. So yes I am that girl that walks by a group of smokers coughing and waving the smoke away from me. I am that girl that will tell you to your face not "those can kill you" but "those are killing those around you".
So when I was 21 I met my husband who smoked and so did all his friends. I made him promise that he would never smoke inside the house or let anyone else and he would try to quit and that if we ever got married and had kids he would quit for them. Well when I was 5 months pregnant with bug he quit. He quit cold turkey and it's been almost 3 years now. So I learned something from my husband. If someone wants to quit they can they just need to want it bad enough and have a good enough reason. Therefor if someone especially a mother and even more especially a green mom continues to smoke.. then she just doesn't care.
So yes this is a lecture on health and yes you all know what can happen to babies exposed to cigarette smoke. That smoking inside can cause SIDS, that childhood obesity and asthma are related to it. That cancer and many other deseases can be the end result.
But what do cigarettes do to our environment. Why is it so hypocritical to be a Green Mom or Dad and smoke? According to an article I found "Researchers estimate that 1.7 billion pounds of cigarette butts accumulate in lakes and oceans and on beaches and the rest of the planet every year. Discarded cigarette butts and filters contain the same dangerous chemicals contained in a cigarette, including carcinogens and other poisons." (http://www.ucanquit2.org/facts/Environment.aspx) Birds and other animals can eat them. Children can find them and play with them or eat them (I know I have had to clean my sons hands several times after he has picked up a cigarette butt.) Cigarette butts do not biodegrade. They stay around for a very long time. As most of them end up in lakes and streams they also end up inside the fish we catch and eat and the pets we love so much among lots of other animals. "Globally, about 4.3 trillion cigarette butts litter the earth every year. Smokers in the United States account for more than 250 billion cigarette butts, in the United Kingdom 200 tons of butts are discarded, and Australian smokers litter more than 7 billion cigarette butts every year. In most Western countries cigarette butt litter accounts for approximately 50 percent of all litter." That is a lot of non biodegradable waste but what about those carcinogens leaking out into the water we drink and the food we grow? Cadmium, lead and arsenic can begin leaking into the drinking water within 1 hr of being flicked into a stream or lake.
So what does this all break down to? It comes to this. Do you smoke or know someone who does? Do you care about those around you, your children, your pets, the food you eat, the water you drink? Do you care about getting cancer, emphysema or other worse things? If you do please quit. Smoking is at the very best a disgusting annoying habit.. at the very worst a deadly game of Russian roulette only the chamber has 4 bullets instead of one.