The other day I met a really amazing family who sadly live almost a 2 hour drive from me, so I probably won't get to see them too often, but they are all about living as close to nature as they can. My best friend introduced them as Mom and Dad. They really are just so warm and welcoming that by the time you leave you do feel as though you have adopted a new Mom and Dad. So I will refer to them that way in this blog post so I don't have to use names.

Mom introduced me to a new way to eat Dandelions, dandelion jelly. Now Those who know me know my love of edible back yard plants is never ending. So I have decided to start doing regular blog posts about trying all the things you can eat from your backyard, how to prepare them and why they are super good for you. Those who know me also may know that my love of that little yellow edible flower has no end. Not only do I have one tattooed on my lower back, but I often partake in dandelion salad, steamed dandelions, hair pieces made from the blossoms, have received bouquets of them as gifts and loved it more than roses, and even once had a D and D character named for the family of flowers that Dandelions are in. So I thought since they are in season, abundant and free I would begin with Dandelion Jelly.
I found a recipe online and was told by my best friend that it resembles honey. So Bug and I went into our yard and picked an entire basket of dandelion blossoms. 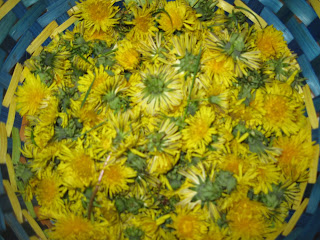 Then I had to separate the yellow petals and pollen tubes from the green cover petals and stems. Then I added a few cups of water to the petals in a pot and brought it to a boil. 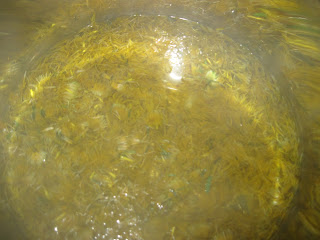 Then I let that steep over night in the refrigerator. In the morning I strained the dandelion "tea" through a mesh and then added the zest and juice from one lemon and return it to the pot. 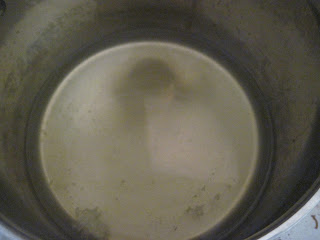 Then I added sugar and brought it to a low boil. This was boiled down until a syrupy consistency. It never became true jelly I noticed.. instead it does indeed take on a honey like consistency. 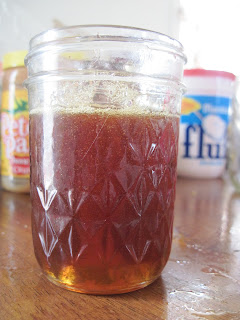 So there you have it, a small jar of Dandelion Jelly (Honey). It does indeed taste a lot like honey. It is super tasty. I am hoping to do a few more of these backyard edibles posts soon.
Posted by Green Mommy at 1:59 PM